Top-of-mind Question: “Is there a need for a more balanced media especially in COVID times?” 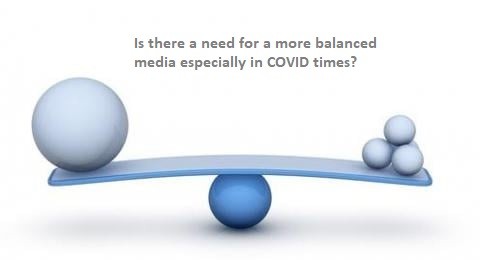 We see that television news channels are mostly focusing on the negatives of the day and do not balance their time and emphasis on the positives taking place in society. In pandemic times this does not help viewers in coping with mental stress. Instead, it enhances the magnitude and spread of panic. Governments, WHO, UN, and other such organizations, in addition to providing cure solutions, like helpline counseling, may also like to suggest some prevention measures that the media could adopt to permeate positivity.

Media, whether knowingly or unknowingly, is spreading panic among society especially among those who are not privileged to get a big picture of the ground reality.

This lack of balance is making the character of our societies skewed to such an extent that we will stop seeing the good things around us and only focus on the negative – moving society’s psyche towards cynicism and distrust.

A recent article in NYT states the actual deaths in India compared to the published figures are double at a conservative best, five times in a most likely scenario and 14 times in a worst-case scenario. There were no qualifying statements of the models used for calculation. In addition, they published photographs of mass crematoriums as if this was a proof of concept. It could be inferred that this was the state of affairs in most of the 6.4 million villages in India.

There is no harm in sharing any true stories, though it would be good to also propagate the incredible COVID response stories that show the spirit of India in battling the pandemic in equal measure. These spirited efforts by individuals and organizations, in a country that lacks health infrastructure, resources and funds are a phenomenal achievement. The bonding of communities across caste and creed to serve those in need in tough times will be India’s takeaway from this pandemic.

We see individuals, corporates, government, civil services, defense, police, teachers, banks, and many others work alone and in sync with each other to make a difference. Many industrial houses have stepped up to provide help with funds, medical equipment and services, infrastructure, and COVID care services among others.

In the political arena, there are also pockets of success on the ground but unfortunately, all political parties strongly believe that their job is to oppose each other. “Everyone is my opposition – which means I need to oppose” seems to be the commonly agreed motto. Hence, we rarely see opposing parties acknowledging the good done by others. The negatives of leaders are brought to the forefront making it look as if the whole country is moving in a downward spiral. While the truth is that every party has pockets of excellence.

This lack of balance needs to be countered by spreading positive stories especially to those that are vulnerable. People who are: old, living alone, have near and dear ones living away, the young and vulnerable, and mostly to those whose lives have changed due to the loss of near and dear ones. There is also an increasing number of those that suffer from anxiety disorders and are susceptible to panic and depression that need attention.

Appealing for a more balanced media does not mean that media is not doing a good job. They have gone all out by putting additional ‘feet on the street’ to provide more and better coverage. As many as 450 journalists have lost their lives to the pandemic. It is also acknowledged that the media helps to show the mirror not only to the governments but to all facets of society. However, the media also needs feedback or a mirror to look at itself. This is our contribution that may be added towards the overall feedback of the viewers.

In today’s connected world, social media has made this feedback more widespread and intense. The smartphone users in India are around 760 million, while print media readership is about 425 million, and TV records about 760 million viewers per week at peak levels. All this indicates that smartphone connectivity provides a good source for measuring how perceptions of society keep changing on specific topics. What we see is fear and panic spreading and the source appears to be the TV. Many are advocating to watch TV news selectively and for a limited time.

The appeal is for the media to give a more balanced picture to viewers to nurture hope and prevent society from becoming psyche skewed.

A personal example of what I mean by skewed thinking.

Once at a large nationalized bank branch, an elderly lady clerk saw me struggling with a form and helped me even though she was busy. On approaching the bank manager to record her good services I was asked to write my compliment in a complaint book. Upset with the bank’s attitude towards the employees I wrote to the bank MD and suggested they introduce a compliment book to motivate employees. A few days later I got a reply from the chief vigilance officer, the gist of which was “We like to receive complaints, so we can drive our people to serve you better”.

I have had similar experiences at the passport office, airport security, and customs duty, which make me feel that negativity is the order of the day. Change towards a positive outlook would go a long way in building a more balanced community.

Building hope, especially in difficult times, helps people to have a greater sense that life is meaningful. This also facilitates them in getting through tough times. The media can also take some responsibility in creating this hope for the betterment of society. A balanced, independent and unbiased media is one such way.